Read all about it! As the Coronavirus worsens, airlines have reacted by slashing service to Hong Kong and mainland China. Retailers and food-service giants such as McDonald's are closing locations, too. And neighboring countries are closing their borders. Here's how it's happening. New items are at the top; read up from the bottom for full context.

As the Coronavirus spreads and more governments are affirmatively urging citizens to defer China travel, more airlines are dropping more flights. Some have now completely ended their China service. And don't think the flight suspensions are due to illness fears. This is about business--or, more accurately, the lack of it. Here are the latest developments.

United Airlines has now cancelled all flights to China between February 6 and March 28. The airline had previously cut about half its schedule.

American Airlines has now cancelled all flights to and from the China mainland immediately. The suspension will last until March 27.

Delta Air Lines has now cancelled all flights to China starting February 6 and lasting through at least April 30. That is the longest flight cancellation to date.

El Al has dropped its flights to Beijing between February 2 and March 25.

The World Health Organization has done its bureaucratic duty and today declared a global health emergency over the Coronavirus. It doesn't mean much in the real world, of course, but the following developments today do:

United Airlines has clarified details of its China flight cancellations. The largest U.S. carrier to China says San Francisco flights will continue, but all others are essentially cancelled. Three weekly LAX-Shanghai flights will also continue.

American Airlines pilots have sued in a Texas court to force the carrier to halt all flights to China. The airline cut certain China routes yesterday, but it continues to fly several routes to the mainland and Hong Kong.

The U.S. Government now officially says do not travel to China.

British Airways has cancelled flights from London to Shanghai and Beijing until February 29.

Finnair has spent several years developing Helsinki as a hub for Asia connections. But now it has cancelled its flights to Beijing and Nanjing through late March.

SAS says it has cancelled all flights from Copenhagen to Shanghai and Beijing until late February.

All Nippon Airways says February bookings for flights from China have fallen by half compared to February, 2019. Bookings to China from Japan for February have fallen by 60 percent.

Singapore Airlines is cutting dozens of flights to China from its schedule through February.

Cruise lines have begun dropping Hong Kong as a port of call. Most are substituting Singapore. Separately, the world's fifth-largest cruise ship, the Costa Smeralda, was locked down at Civitavecchia, Rome's cruise port. The issue? Two passengers from Macau were placed in confinement on board as officials watched for signs of the Coronavirus. The cases were not the virus, however, and the ship's more than 6,000 passengers were allowed to disembark.

Russia has closed its 2,670-mile border with China in an effort to stop the spread of the virus.

Airlines continue to drop flights to China as traffic plummets and the Coronavirus crisis worsens. Here are today's developments:

American Airlines says it will suspend its flights to Beijing and Shanghai from Los Angeles starting February 9. The closure will continue until at least March 27.

Delta Air Lines says it will cut its 42 weekly China frequencies in half beginning February 6. At the moment, however, it promises to keep operating on all routes.

Air Canada says all nonstop flights to China are cancelled effective Thursday (January 30). The service disruption will continue until at least February 29. The airline had previously said it would only cancel select flights.

Lufthansa says it has cancelled all flights to mainland China. That includes all service operated by its subsidiaries Swiss International and Austrian Airlines, too. The flight ban continues until at least February 9. The carriers serve five cities on the mainland.

Air France, KLM and British Airways say they are cancelling some frequencies on their China routes. All three carriers will continue to fly to the mainland for the time being.


No Coffee, Few Fries, No Meatballs

This must really be serious. Starbucks says it has closed more than half of its 4,300 coffeeshops in China. IKEA says all of its stores in the country are now closed. And McDonald's announced late Wednesday that it has closed all of its branches in Hubei Province, where the Coronavirus began. Expect more closures of major chains in the days ahead.

Hong Kong is cutting most of its ground links to China effective Thursday, January 30. That includes the extensive cross-border rail, bus and ferry service that operates between the city and the mainland. Hong Kong chief executive Carrie Lam made the announcement wearing a face mask at Tuesday press briefing. Critics say the government isn't doing nearly enough to isolate the city from the mainland. Meanwhile, Mongolia and North Korea have closed their land borders with China. Papua New Guinea says it will not accept any traveler arriving from China. 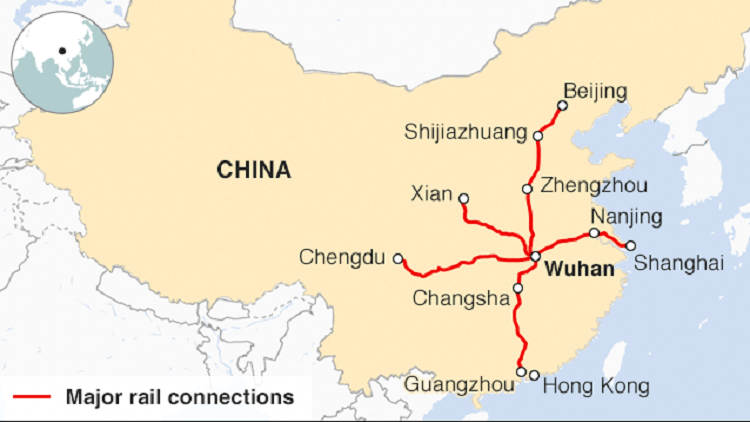 Here's an update on the travel situation to/from China as airlines and other travel providers react to the widening Coronavirus that originated in Wuhan in the Province of Hubei.

United Airlines, the largest U.S. carrier to China, is halting most flights to Beijing, Shanghai and Hong Kong. Citing a significant reduction of traffic on its routes, the airline says it'll slash two dozen flights to those cities beginning on Saturday (February 1). This includes most nonstops from its Newark, San Francisco, Chicago/O'Hare and Washington/Dulles hubs. Cancellations will last at least a week, United said. But expect longer disruptions due to the virus and virtually nonexistent travel from the United States.

Air Canada is dropping select flights to China although it hasn't specified which of its 33 weekly nonstops will be cut.

Cathay Pacific Airways, the Hong Kong carrier that offers extensive connecting service to the mainland, is slashing about half of its China schedule. Via its Dragon Pacific subsidiary, Cathay has been flying to more than two dozen cities on the mainland.

China Airlines, the Taipei-based carrier, has dropped all flights to the mainland. It's also making in-flight service cuts to Hong Kong and Macau flights. Things such as hot meals, pillows and blankets and headphones are being eliminated in an attempt to limit potential items of contamination. EVA Air, also based in Taipei, is cutting some flights to China.

The Centers for Disease Control says to avoid all non-essential travel to China and avoid all travel to Hubei. The U.S. State Department has echoed the advice. Other countries are recommending similar discretion.

The U.S. State Department is considering an airlift to evacuate American citizens out of the country. If you are currently in China, make sure you have registered at the U.S. Embassy. You can register your presence here. Do not go to any U.S. Embassy or Consulate in China because they are closed through Friday. (The reason: the Chinese government has "extended" the Lunar New Year holiday through Sunday, February 2, in an attempt to keep people home and minimize crowds during what normally would have been the busiest holiday travel period of the year.)

Let's be honest. You know nothing about the Coronavirus. You have little or no idea about Wuhan, the central Chinese city where the disease seems to have originated. You're concerned about traveling because this sounds suspiciously like the SARS pandemic of 2003-2004. And fast-moving stories like this seem much harder than ever to follow. Fear not. Here are some basic details and important links. I'll continue updating this section as needed in the days ahead.

Here is the Centers for Disease Control backgrounder on the Coronavirus. It offers advice for protecting yourself at home and on the road. And here is what the World Health Organization says.

Here is what you need to know about Wuhan, capital of Hubei province, a London-sized city with a population of more than 11 million.

Here's a BBC story on the decision to essentially quarantine Wuhan and ban most travel to, from, through and around the city. That is especially onerous given that this weekend is the Lunar New Year, the busiest travel period of the year in China. And the South China Morning Post reports three other cities in Hubei Province also have been locked down.

Many hotel chains are now waiving change and cancellation fees for China bookings.

Here is a Bloomberg piece about how airlines and airports are dealing with the Coronavirus.