Read all about it! Heathrow's Christmas bears have been banished this year. Currywurst in Berlin and bagels in Montreal are on the global agenda. An airline president in Asia fired for smuggling. Barack Obama likes Hampton Inn, but Illinois guests have trouble checking into one. Toxic culture at a luggage company and passenger jets under attack. And much more.

Unbearable! The Bairs Won't Be Back at Heathrow!

There's a million things wrong with London's Heathrow Airport--or, in keeping with the holiday season, let's say Santa makes a list, checks it twice and always decides LHR is naughty, not nice. But Heathrow was happier around Christmas in recent years thanks to an annual commercial extravaganza featuring the Bairs, animated bears whose entire lives were warmed by London's major airport. Yet never assume the grinches who run Heathrow can't find a new way to steal Christmas. Despite universal acclaim and nearly eight million YouTube views for the previous three years of holiday ads, the airport has quietly killed off the Bairs. There won't be a 2019 Christmas spot and the bears' Heathrow-hosted Web pages have been deactivated. Maybe it's because respected British travel writer Simon Calder used the 2018 Bairs Christmas spot to excoriate Heathrow mismanagement. Maybe it's because Heathrow executives

really are Scrooges. Either way, it's just, er, unbearable.

In an attempt to humanize Heathrow, the powers that be at London's big airport created a little ad campaign for the 2016 holidays. The spot (top) introduced us to Doris and Edward, English seniors craftily stylized as anthropomorphized bears. (If you thought "Hey, those are Paddington Bears!" you caught the barely subliminal transport homage.) The pair were flying home from their retirement in a warmer clime and were "humanized" when they met their waiting family at Heathrow.

British audiences, suckers for these kinds of longer-form, high-concept holiday "adverts," were delighted. So Heathrow went back to the emotional well in 2017. That ad (middle) was a smash. The two-minute "film" traced the 50-year love affair between Edward, once a bedraggled business traveler, and Doris, a BOAC stewardess and, later, a British Airways flight attendant. Set to Petula Clark's gloriously upbeat 1966 hit, I Couldn't Live Without Your Love, Doris and Ed built a family and faithfully met each other at Heathrow time after time across the decades. The spot cleverly celebrates Heathrow as it changed in ten-year increments from 1967 (lots of wood paneling and Helvetica signage) to the supposedly glittery present. There's also product placement galore. Walkers Shortbread, briefly viewed in the 2016 spot, is positioned as the Bairs' traditional Heathrow arrival gift. Walkers eventually sold packages of biscuits featuring the Bairs. And British Airways, whose logo wasn't even glimpsed on a jet fuselage in the 2016 spot, is all over the 2017 production.

Last year's spot (above, bottom) wasn't nearly as clever as the 2017 version, but it did continue the family story. The Bairs are living in the Florida Keys and facing a lame, lonely American holiday. Inspired by a video call with the grandbears in a London decked out for a festive family Christmas, Doris and Edward hop on a plane back "home" to ... Heathrow. Walkers Shortbread, now the British airport equivalent of a gigantic bar of Toblerone, made another cameo as Ed again disrupted an airport display.

BERLIN: It's hard to fully grasp Berlin's devotion to currywurst--essentially a pork sausage with curried ketchup--but it drives the German capital's culinary landscape. So it's no surprise that unlikely operations such as Konnopke's are being feted as all that's good about currywurst as a social institution.

LEIPZIG, GERMANY: The largest city in Saxony, Leipzig was once mired in East Germany's disrepair and dissolution. Now it's the emerging hipster capital of the reunited Germany.

MONTREAL: If you're a fan of the city's honey-boiled bagels, you know there's been a long, nasty feud between the town's two preeminent purveyors. Now they've banded together to fight new city rules that might hobble their wood-burning ovens.

SAN FRANCISCO: How fast is the capital of American high-tech changing? A food writer dug out a copy of an influential 1995 guide to the Bay Area's best and most interesting restaurants. Most of them are now closed. In one neighborhood, 13 of 19 listed establishments in the 25-year-old guide had disappeared.

TASMANIA: The little island off the coast of Australia is now a must-visit destination. Which will be big news for people whose only knowledge of Tasmania comes from the Warner Bros. cartoons.


The Airlines Must Be Crazy (Well, Duh!) 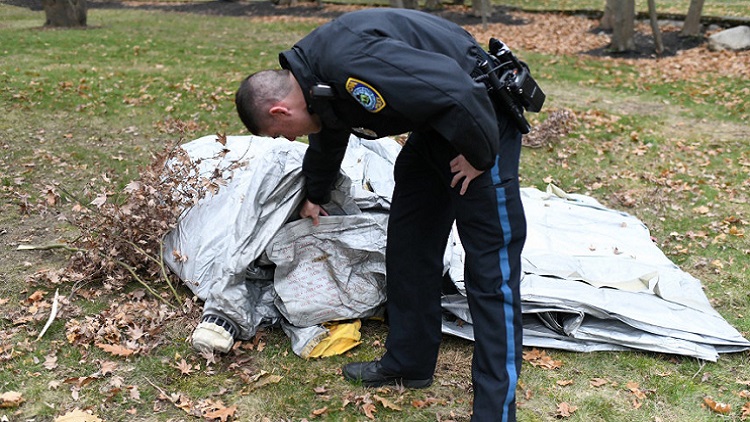 In case you ever question whether the airlines are crazy, you need only glance at these dispatches from around the aviation universe. ... Ryanair refused to carry a woman's wheelchair because it was too large. Then the airline tells her what equipment she should use. Then it refuses to refund her money. Then it apologizes and finally refunds when the media finds out. ... A Delta Air Lines Boeing 767 lost an inflatable evacuation slide and it fell onto a neighborhood (above) in the flight path of Boston/Logan Airport. ... The president and chief executive of Garuda Indonesia is being fired for attempting to smuggle a motorcycle onto a newly delivered Airbus aircraft. ... Cameroon Airlines passengers were unharmed after rebels in the African nation fired on one of the carrier's passenger jets. The separatists say they will fire on any jets that cross their territory without advance notice. ... If you're relying on the FAA to set better seat standards--if not more comfortable ones, at least safer ones in case of emergency--tests at an Oklahoma City facility may not yield more reasonable accommodations.

He must like free breakfasts Former president Barack Obama says he's not big on suites. He's fine with a Hampton Inn.

A hard luggage case Away is a trendy luggage brand just now. Turns out its corporate culture is toxic.

Some of his best friends are hotels Andy Abramson spends more than 250 nights a year on the road. He likes Crowne Plaza and other InterContinental Hotels. "I can say that the staff are not just people I know, in many cases they are friends,” he says.

Not MAX oversight Protracted delays getting the Boeing 737 MAX back in the skies highlight a separate FAA anomaly: lax oversight of overseas repair bases, where many U.S. airlines do maintenance.