Read all about it! Adam Sandler dishes up profound travel truth. Can you travel with cannabis and CBD? Yes. No. Maybe. New Caledonian Sleepers between Scotland and London get off to a sleepy start. Mounting delays at Deutsche Bahn are making Germans late. Canadians think you can do Los Angeles without a car. Flyers have few (if any) rights. And more.

You have to take your travel truth where you find it, even if it comes out of the mouth of goofy Adam Sandler. The comedian and actor returned to Saturday Night Live last weekend for the first time since he was fired from the cast in 1995. He even revived Operaman, his caped, handkerchief-swishing, singing news-parody character. But the travel truth didn't come from Operaman. It arrived in a sketch spoofing Perillo Tours and its amateurish TV spots. After several jokes at the expense of frontman Steve Perillo--who sells Italy trips to folks from around the world, but "mostly from Long Island and Jersey"--Sandler's "Joe Romano" suddenly turns profound. Traveling cannot fix what's wrong with your life, he notes. "If you're sad now, you might still feel sad there." More pointedly, Romano explains that "you're still gonna be you on vacation." Travel "cannot fix deeper issues. That's a job for incremental lifestyle changes sustained over time." Trying to temper expectations, Romano/Sandler even spills the ugly truth about travel photos. "The pictures you're in are gonna have you in them," he says, "If you don't like how you look back home, it's not gonna get any better on a gondola." The sketch lasts about four minutes and Sandler and SNL's writers leap from early parody--visit Venice, "the city of wetness"--to explorations of alcoholic behavior masked by Tuscan wine tours.


Should You Travel With Weed? Convoluted as CBD

Less than a month ago, Robert McGarvey covered the strange netherworld that is cannabis and travel. Now news floodgates have opened, but there's still no clarity. The Atlantic magazine says you "probably shouldn't bring CBD oil to the airport." But cannabidiol (CBD) is suddenly all the rage at hotel spas. "In the spa setting," explains Hotels magazine, "topical CBD is touted as a pain reliever, anti-anxiety treatment, anti-inflammatory, sleep aid [and] wrinkle fighter." And now there's the tale of a 69-year-old great-grandmother busted at Disney World in Orlando. Her offense? Bringing CBD into the park. She was arrested and spent 12 hours in jail despite the fact that the CBD was medically recommended and she produced the literal doctor's note. Ironically, CBD is widely sold in Florida in retail shops despite the fact that it remains against state statutes. 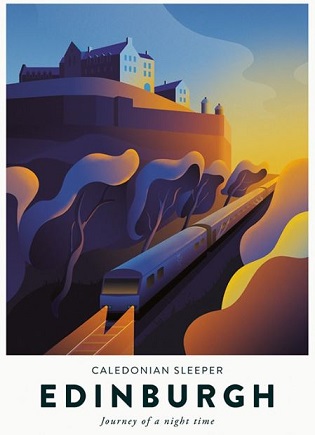 The Caledonian Sleeper train linking London's Euston Station with Glasgow and Edinburgh in Scotland, remains a big deal in what is more and more the Disunited Kingdom. And a fancy new set of sleeper cars costing 150 million pounds was meant to revitalize the so-called Lowland route as well as the Highland route linking London and Aberdeen, Inverness and Fort William. As the trains' new site explains, the Caledonian Sleeper is supposed to be a "magical journey," complete with perks (en suite toilets and showers) previously unknown on British trains. SERCO, the train's operating company, even created a series of stylized throwback travel posters (left) to promote the new trainsets. But the service got off to a rocky start with three-hour delays in both directions. Needless to say, newspapers such as The Scotsman were not kind. Nor were the Independent or The Guardian. But The Telegraph was slightly more appreciative. "The Caledonian Sleeper is slow, expensive and utterly delightful," wrote Juliet Samuel. As for the delays at launch, Samuel was sanguine. "If passengers are voluntarily paying top dollar for a form of transport that takes six times longer than flying, timeliness probably isn’t the top priority."

All things locomotive aren't better in Germany. Deutsche Bahn was once the envy of Europe's railroad world. No more. The "German reputation for punctuality is being tarnished by a worsening record of delays, Politico Europe explains. "One in four trains last year was late, and 22 percent of long-distance departures so far in 2019 have been delayed." The culprit? Years of underinvestment the once-vaunted long-haul system.

The U.S. rail system is hardly worth mentioning compared to the extensive British and German lines. But it should be noted that Denver has opened 18 kilometers of electrified commuter rail. The new G Line connects the western suburb of Wheat Ridge with Denver Union Station, home of Amtrak, three light-rail lines and the city's two other commuter rail services.

And LeBron left again It's hard enough to be Cleveland, the cloudiest city in the country. But hardy Ohioans who've kept faith with the city that too many of us still call the Mistake By The Lake have a new digital woe: Cleveland Hopkins Airport has been hit with a ransomware attack.

The heretic's Los Angeles Los Angeles without a car? Impossible, you say. Easier than ever, says The Province, a Vancouver newspaper. Maybe Canadians see what we do not. "For a city that's long been associated with grind-to-a-halt freeways, Los Angeles has done a remarkable job with its transit system in recent years, weaving a series of underground and over-ground lines that link far-flung areas of the city."

Rights? You're passengers. You don't need no stinkin' rights. An ugly incident--a passenger was put off a Frontier Airlines flight after complaining about finding vomit on her daughter's seat--has Laura Begley Bloom wondering if flyers have rights. Her conclusion? Not many--if any.