Read all about it! Amtrak strands Coast Starlight passengers in the snow for almost two days in Oregon and revives a discussion over whether long-haul trains should be scuttled. A new documentary about the real Green Book and how to examine the genuine articles. Starbucks opens a four-story cafe in Tokyo. A multi-million-dollar Airbnb scam in New York. And more.

Amtrak Agonistes: Passengers in the Snow

The Coast Starlight is supposed to operate from Seattle to Los Angeles in 35 hours. (See the train's route map at left.) Amtrak ironically calls the Coast Starlight "one of the most spectacular of all train routes." Unlike classic routes it inherited when it took over U.S. passenger rail service in 1971, however, the Coast Starlight is an invention of Amtrak. According to the most recent figures I could find, the Coast Starlight loses about $50 million a year. Which renews the argument about whether Amtrak should remain in the long-haul passenger train business. Rail romantics insist it should. Many more realistic voices, including Richard H. Anderson, the former Delta Air Lines boss who now runs Amtrak, want to prioritize short-haul routes that at least have a chance to make money.

I said that same thing years ago in Die, Amtrak, Die. The railroad has a "history of the wrong products at the wrong time." I suggested it was vexed by "bureaucratic ineptitude, fleet decrepitude, labor inflexibility and anything bad you can imagine when the federal government tries to run a consumer service built on the moldy bones of a relic." Want a contemporaneous opinion? "We have come as far as we can with the Amtrak model," F.K. Plous wrote in Railway Age. "Stop wasting time and resources trying to get Amtrak to behave like something it's not." Plous says we need a new federal approach to passenger railroads. "That means passing a new National Transportation Act with all the statutory, budgetary and bureaucratic resources needed to take passenger trains into the post-Amtrak world." 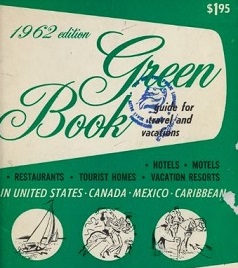 If you caught the Oscars Sunday evening, you probably saw Samuel L. Jackson alerting rabid New York Knicks fan Spike Lee that his woeful team had actually won a basketball game. I was one of the few watching the Knicks, so I missed Green Book controversially copping the Oscar for Best Picture. I haven't seen the film, either, so I can't speak to its quality, the cringeworthy nature of its whitesplaining or the portrayal of the actual Negro Motorist Green Book travel guides published between 1936 and 1966. But The Atlantic magazine compares the movie to a Smithsonian Channel documentary about the guides and how they shaped travel during some of the vilest years of segregation. There's a clip here. (The documentary itself is available at the Smithsonian Channel site or via major streaming services.) If you want to examine copies of the Green Book for yourself, the New York Public Library offers digital downloads of 23 editions starting in 1937.

CHITTAGONG, BANGLADESH: A Biman Bangladesh Airlines flight made an emergency landing in Chittagong after an apparent kidnapping. All 142 passengers were safe, but the accused hijacker was killed by commandos. The later reports indicated the "hijacker" was waving a toy gun and no explosives were found on the Boeing 737.

HENDERSON, NEVADA: Many business travelers only know about Henderson because it is the home of a former Ritz-Carlton resort that slid down the brand ladder and is now an indifferent Hilton. But the Las Vegas suburb is booming and more than 50 percent of the new arrivals are disaffected California ex-pats.

LONDON: Whatever happened to the Regent Palace Hotel, a 1,000-room hotel that opened in 1915 as a "palace" for the middle-class visitor to London? After a long and checkered history, all that remains is a fancy brasserie. The rest of the building has been converted to offices and retail space.

NEW YORK: The Trump Soho was a hot hotel, especially with NBA players who loved the long beds. Then President Trump went to war with trendsetters like LeBron James and lots of others and the business tanked. Desperate owners tossed the Trump Organization as managers in 2017 and renamed the property the Dominick. Now Bloomberg News says that the boldface guests have returned and happy days are there again.

TOKYO: The story is literally public relations puff, but check the pictures. Starbucks has opened a 4-story "roastery" in Tokyo and it sells more than 100 coffee and tea drinks. There is also a cocktail bar and an insane amount of gorgeous-looking coffee equipment.

WASHINGTON: An Arizona Republican thinks anyone who is cleared for TSA PreCheck should be allowed to buy a firearm without further investigation or checks. Rep. Debbie Lesko wanted her amendment attached to H.R. 8, a bipartisan universal background bill that cleared the house this week. The fate of the House measure is unclear in the Senate.

The ABCs of an Airbnb scam How do you scam Airbnb? With 100 phony host accounts and 18 dummy corporations to create an illegal hotel business worth more than $20 million.

Cookie culture Even the most disciplined eater among business travelers has occasionally slipped and binged on a bag of Pepperidge Farm cookies. (It probably doesn't hurt that the some of the cookies are named after specific European cities.) Would it shock you to know there was a real Pepperidge Farm? Or that founder Margaret Rudkin was a self-taught kitchen genius who built the business at a time when women weren't supposed to build businesses?

Combs and Klobuchar and airports Now that Minnesota Sen. Amy Klobuchar is running for the Democratic Party nomination for president, stories of her "mistreatment" of staff abound. Of note to us in travel? The tale of her allegedly eating an airport salad with a comb and then giving the comb to a staffer to clean.